This Paleo Bulgogi recipe takes the deliciousness that is traditional Korean BBQ beef and removes the soy, grains and vegetable oils, but keeps that trademark sweet and savory flavor. We serve this bulgogi with zucchini noodles, mushrooms and a beef bone broth for the ultimate easy, healthy and tasty dinner.

As many of you know, my husband has an autoimmune condition that he is currently managing through diet/lifestyle modifications. While he is starting to reintroduce more produce and spices in to his diet, for nearly a year his diet consisted primarily of meat because that is what he could tolerate.

Because of this, his favorite (read: only) restaurants he likes to go to are Brazilian steakhouses, and now that he has a little more lenience in his diet, Korean BBQ restaurants. If you have never been to one of these restaurants, you basically pay one price and get to eat an endless amount of meat. For him, there really is not much better.

When we go to Korean BBQ, while we like to try all the different types of meats and marinades, our favorite is always the bulgogi. It is slightly sweet, salty and caramelizes when you cook it. *Chef's kiss* It is true perfection.

Why Make This Recipe Paleo-Friendly?

Going out to these restaurants are always fun because you get to prepare the meat at the table over open flame, but I always have a lingering fear that the unknown ingredients in the marinade might send him in to a flare.

Restaurants almost exclusively use vegetables in their cooking because of cost, this is something I know and a risk you assume whenever you go out to eat unless otherwise noted on the menu. I also know traditional bulgogi is made with soy sauce and sweetened with different types of sugars (depending on the recipe). None of these components are things he currently includes in his diet.

That sweet and savory bulgogi flavor was something I knew I could replicate using paleo-friendly ingredients. So, I did and it is phenomenal.

I used a recipe from Hyosun at Korean Bapsang as a base to understand the basic ratios of ingredients I would need for this marinade. I also used her suggestion to serve the bulgogi "Seoul style" as the inspiration to serve this meat in a simple broth-based soup. You can view her original delicious recipe here.

Bulgogi, literally meaning "fire meat", originated from northern areas of the Korean Peninsula. It is a very popular dish in South Korea and can be found at most restaurants.

Made from thinly sliced and marinated beef or pork, bulgogi is grilled on a barbecue or on a stove-top griddle. It can also be stir-fried.

Typically, ribeye and sirloin steaks are used in the beef variation.

How To Make Bulgogi

Bulgogi at Korean BBQ restaurants in the states is grilled on a tableside grill. While the meat can be prepared in many different ways, it is most commonly cooked on a small grate over open flame.

Bulgogi is marinated first and then grilled or pan seared. Because the meat is so thin, it does not take long to marinated. Marinating for 1 hour results in a very flavorful meat.

Mix ingredients together and pour over the sliced beef, making sure it is all covered well. Refrigerate for 1 hour before cooking.

To cook bulgogi, unless using a stir fry method, you want to place the meat on the skillet or grill in batches because over crowding will prevent the meat from caramelizing properly. Watch carefully as the meat cooks, it is very thin and the marinade contains sugar which can burn easily.

Where Can I Find Thinly Sliced Meat

If you have a Korean grocer locally, you can almost gaurentee to find meat cut specifically for bulgogi there. You can also ask the meat/deli counter in your grocery store to thinly slice ribeye or sirloin to be used for bulgogi.

Trader Joe's also carries beef thin enough to use for bulgogi. It is not labeled as bulgogi meat but is paper thin and found in the fresh meat section.

What Make This Recipe Different From Traditional Korean BBQ Beef?

This recipe involves some ingredients that are not present in traditional beef bulgogi in order to make it paleo.

Coconut aminos was used in place of soy sauce. The slight sweetness of coconut aminos works well in this recipe and allows us to use slightly less sugar.

Did you try this Paleo Bulgogi recipe? I would love to see your creations! Take a photo and tag me on Instagram or leave a photo comment on Pinterest.

Feel free to leave a comment and a rating below. Feedback is always appreciated! 😊 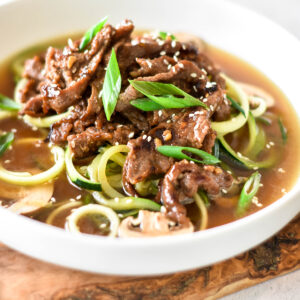