These Paleo Carne Asada Tacos are the literal best. They are gluten-free, dairy-free and damn delicious. You don't need to be paleo to enjoy all the goodness these tacos have to offer: flavorful marinated and seared meat, crunchy veggies, creamy avocado, wrapped up in a perfect grain-free tortilla. Perfection.

Who doesn't love a good taco? Tacos are literally a vessel to shovel all sorts of tasty toppings in to your mouth. Is there anything better? I think not.

These paleo carne asada tacos combine the best of all worlds. They are simple, full of flavor and still incredible healthy!

What Is Carne Asada?

Carne asada literally means grilled meat. It is sliced thin or cubed, and served on tortillas or used as an ingredient in a wide range of dishes.

Flank steak, skirt steak, flat iron, sirloin, or even trimmed brisket can be used to make carne asada. These cuts of beef are marinated in a lime-based marinade (although orange juice is also fairly common) and then grilled to perfection. The meat is grilled over a hot fire, commonly charcoal.

While this recipe would not be considered traditional because it is pan seared, it still has all that carne asada flavor. For a more traditional preparation try this Paleo Carne Asada.

How To Make Paleo Carne Asada

Making carne asada paleo-friendly is fairly simple. As long as you watch out for vegetable oils and added sugars, most carne asada recipes should be easily converted to paleo-complaint.

Common ingredients in carne asada include things like spices, lime juice, vinegar, cilantro, oil, salt, garlic and spicy peppers. These ingredients are all considered paleo if you opt for avocado or olive oil, and swap white vinegar for something like ACV.

How To Prepare The Marinade

Combine the following ingredients in the base of a food processor:

Process on high speed for about 30 seconds or until all large chunks disappear.

How To Prepare The Meat

To prepare the meat, start by cutting the meat in to ½ inch cubes. Begin the cuts by slicing against the grain.

Place the cut steak in a resealable gallon sized bag. Cover it completely with the marinade, reserving ⅓ of the marinade for use when serving. Seal the bag and marinate for at least 2 hours, but up to overnight.

Once the meat has marinated, heat a frying pan over medium heat with a little bit of avocado oil.

Once the pan is hot, add the steak and cook for about 6-9 minutes or until lightly seared and browned on all sides. Serve while the meat is hot.

Where To Find Paleo-Friendly Tortillas?

The freezer section at most grocery stores carry paleo-friendly tortillas now. Which is pretty freaking fantastic.

Paleo tortillas are usually made with coconut flour, cassava flour, almond flour, or a combination of grain-free flours.

Marinating the meat is very important, both for tenderness and flavor. These cuts of meat tend to be more tough, so proper marinating can be the difference between meh and amazing meat. Two hours is the minimum you want to wait, but it doesn't hurt to marinate longer, even overnight! Be patient!

When cooking the carne asada, try to drain as much of the marinade as possible. This will help your get a better sear on the meat. You can spoon out additional moisture as the meat begins to cook.

Did you try these Paleo Carne Asada Tacos? I would love to see your creations! Take a photo and tag me on Instagram or leave a photo comment on Pinterest.

Feel free to leave a comment and a rating below. Feedback is always appreciated! 🌮 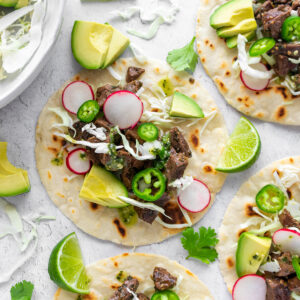 **calculated calories do not include tortilla, but does include 100% of the marinade (which most is actually removed before cooking).