These Maple Balsamic Brussels Sprouts are what brussels sprout dreams are made of. Perfectly caramelized and lightly sweet, this quick side dish is the perfect pair for a steak or turkey dinner.

As an Amazon affiliate I earn from qualifying purchases. Click here to read my affiliate disclosure.

Kicking This Recipe Up A Notch

These brussels sprouts are divine on their own, but mix some chopped bacon, dried cranberries and toasted pecans and you have something that will convert even the most skeptical non-veggie eaters out there.

Do I Need A Cast Iron Skillet?

A cast iron skillet will make this recipe easier but is not a deal breaker. If you don't have a cat iron skillet, cook the brussels sprouts in a regular frying pan and then transfer to an oven safe dish before broiling.

Is It Brussels Sprouts Or Brussel Sprouts

Although, I personally call this round cruciferous vegetable "brussel" sprouts which they are commonly referred to as, the proper name is brussels sprouts. I was always curious why spell check would trigger a warning every time I would type "brussel sprouts". Tomato, potato.

Brussels sprouts originate from the Mediterranean region along with other cabbage species, but first appeared in northern Europe during the fifth century. This vegetable was later cultivated in the 13th century near Brussels, lending the name.

How To Pick The Best Brussels Sprouts

Brussels sprouts are usually harvested in the late fall, and can be harvested throughout winter in milder climates. Buying seasonally will ensure a more flavorful and fresh product. 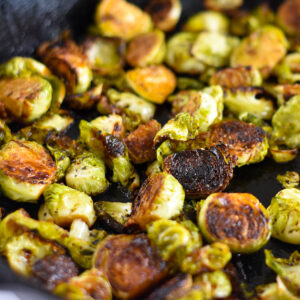